Tide Hiker has sold!   A thorough cleaning and minor fixing, an extensive marketing campaign (including a comprehensive on-line description) coupled with unending time commitments to telephone and email inquiries and personal tours paid off.   We had many inquiries from serious potential buyers who saw the Tide Hiker ads on one or more internet sites we used. A very nice retired couple from Arizona has purchased Tide Hiker and plan to live aboard and cruise full time, just like we did.  And, they kept the name.  So, "Tide Hiker" lives on.

As a result, this will be our last Trekking with Tide Hiker blog.  We want to thank all of you who have remained avid readers.  We have enjoyed blogging our adventure and responding to your many calls, notes and emails.  It's been a wonderful five-year adventure and we're happy to have brought this virtual trek to you.

Us?  We will make way for St Petersburg, FL and begin the next chapter of our lives there.  We'll get a rental unit temporarily until the right condo becomes available.  Wish us luck!!
Posted by Norm and Vicki Naughton at 3/16/2012 04:15:00 PM 2 comments:

Tide Hiker is now for sale by owner. For a full description and photo gallery, please go to http://tidehikerforsale.blogspot.com
Unfortunately, our delay at Dog River and weather-related delays in Florida's panhandle prevented us from joining friends for Thanksgiving (bummer) and being in St Petersburg in time for their annual boat show.  But, we have more plans to expose Tide Hiker to the buying public. First stop, Stuart, FL.   If you would like to see our route from St Pete to Stuart, Florida down the west coast, through the Okeechobee Waterway and Lake Okeechobee, check out the link below.


St Petersburg FL to Stuart FL
Our cruise down the west coast was rewarded with a dinner and breakfast with our friends Roger and Lisa in Cape Coral (FT Myers area).  Vicki and Norm were still suffering from colds, so we stayed on the boat that night rather than enjoy the Cicconi's wonderful invitation to "sleep over".  When you are not well, your own bed is best.  We were in town less than 24 hours, but we made the most of our time there.  Sorry, we did not take any pictures.

Roger picked us up at the marina in his runabout.  We boated over to his and Lisa's house which is situated on one of the many canals in Cape Coral.  We had a few pops; and when Lisa came home from work, we were off to dinner, laughs, good wine, laughs and more laughs.  Then, after a restful night's sleep, we were again escorted to a great Italian restaurant with a fantastic menu and array of breakfast specials.  Ummmmmmm.  It was a quick visit, but we had to push on to Stuart in time for the Boat Show.  And, we had to beat some predicted nasty weather mid week.  Our timing worked out great and we arrived in Stuart as planned. 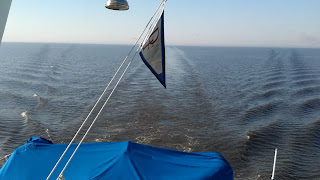 Beautiful day crossing Lake Okeechobee
Even though we were not allowed to enter Tide Hiker in the show (limited to broker boats only), we wanted to get some exposure from the "buying public" that will be attending the show.  One of the tactics Vicki thought up was to stand outside of the show entrance with a sign directing folks to our marina and Tide Hiker.  Well, she was soon kicked out of the entrance by show officials.  So, she moved to outside our marina on one of the roads going to the show and where the parking shuttle passes.  So far, she has given out a dozen or so "sell sheets" to interested show-goers; and, we had one prospect take a long tour.  He's from Finland and wants to show the boat to his wife next month. Cross your fingers!!! 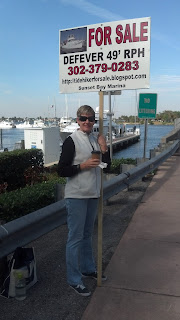 Vicki, "working the corner"
Vicki's avoiding the authorities while "working the corner". Norm's sprucing up the engine room; and, remaining available for tours and calls.  Lot's of folks are "walking the docks" and may want to inquire about Tide Hiker.  Cross your fingers!!!

As good fortune would have it, there are other DeFever Cruisers here at Sunset Bay Marina.  Our good friends Joe and Julia aboard Sea Pearl and Nelson Hallman aboard Isolde are here.  Also, Steve and Di aboard Aurora live in Stuart and will be by to visit. 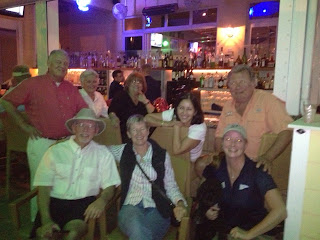 The gang at Sailor's Return Bar (Nelson taking the pic)
Well, that's it for now.  We'll be back later with an update on the rest of the boat shows and our other kooky activities.
Posted by Norm and Vicki Naughton at 1/14/2012 06:03:00 PM No comments: