Tide Hiker is now for sale by owner. For a full description and photo gallery, please go to http://tidehikerforsale.blogspot.com
In this issue:
Vicki put the electric blanket on the bed the other night because it was forecast to be in the 30's and we were not going to be in a marina for shore power.  This low-amp blanket works great on the inverter. Well, it never got below mid 40's and the blanket never got turned on.  The mornings are crisp however and we broke a panel in the bridge see-through curtains trying to roll it up.  Oh well, another task for the Dog River Boat Yard when we get there.  The point here is that it's time to push it a bit getting south.  It never got above 62 the other day.  Frigid!!  The good news is that the sunny cool days makes for great scenic cruising, lower engine room temps and hot soup/chili for lunch.

We happily caught up with Life's-2-Short in Demopolis, AL.  It just so happened that a dock party was scheduled that night.  Soooooo, yes, we had to partake and continue the festivities with Todd and Brenda at a local Mexican restaurant where the margarita's were again served by the pitcher.  Very important though, they delivered to us that magic elixir only known in these parts.  We ordered it a while back and they were glad to get it to us. 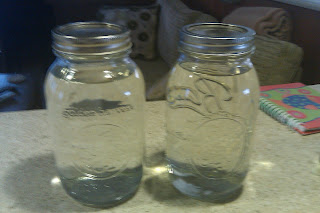 Todd and Brenda delivered this mystery drink we ordered.  The first person to e-mail his/her guess as to what it is, gets some for Christmas.
It was on to Bobby's Fish Camp.  We arrived early after a short day cruise from Demopolis.  Why would we run such a short day?  Why stay in the frigid 60-degree days instead of steaming south?  Well, if you have been one of our followers, you know that we missed Bobby's fried catfish on the upstream cruise.  They are only open Thursday-Saturday.  Unfortunately, this was Tuesday.  What's one to do?  We learned in the last 4 months that Laura will open the restaurant and cook if enough boats stop there.  So, we waited..................
As it turned out, the dock was full with three boats (small dock) and Laura opened the restaurant.  It was a fried catfish, hush puppies, fries party. Yummy!!  Norm took two of his cholesterol-lowering meds that night.
We all wanted to shove off early the next morning; but, FOG arrived as it had for the past 3-4 days and we were delayed a couple of hours.  We did make it through the last lock that morning and Oh, Oh.....we're back in salt water and tidal currents.  After a restful night at anchor in the Alabama River Cut-Off, we arrived Dog River Boat Yard, Mobile, AL.  We'll remain here for a couple of weeks for some cosmetic fixes, some scheduled preventative maintenance and of course, repair of the bridge curtain.
Lucky us, we found some friends here.  Pete and Linda on Carina, whom we have come to know as we cruised south; and, Bill and Charlotte on Omega, fellow DeFever friends.  Is another party brewing?
We are hoping to arrive St Pete mid-November.  Stay tuned!!
Here are some summer cruise statistics:
Posted by Norm and Vicki Naughton at 11/03/2011 07:41:00 PM No comments: