Hello to all our blog readers.  As you might know, we have been exploring permanent retirement locations for when we decide to "move ashore".  We have been doing this for a long time.  While that date is still far off, we have come to like Sarasota very much.  Norm's mom and dad retired here many years ago, so we would visit from time to time.  But they lived south of Sarasota and that did not give us much of an opportunity to explore the urban areas.  On this trip, we took the time to rediscover the city we have been to a number of times. We still have a few more towns to check out including St Pete and some in the Smokey Mountains; but, Sarasota is looking good!!  We'll keep you up to date on our progress from time to time.

Here's our cruise from Ft Myers to Sarasota.  We made a stopover in Englewood, FL (we never heard of it before either) and docked at the Cape Haze Marina.  OK for one night but not more.  Remember, just click on the following link and use the + and - buttons to zoom in or out.  Ft Myers to Sarasota, FL

Our cruise up from Ft Myers was delightful.  The weather was superb, the views outstanding and the seas in the waterway were calm.  We arrived Sarasota on Sunday, March 13 and will remain here for a month.  Our first job was to walk to town and "check-it-out".  We were very impressed to see great restaurants, bars, parks, clean streets and sidewalks.  There are lots of high and low rise condos, single family homes, churches and all the county government buildings.  Not satisfied with just walking, we took a guided tour of the cultural areas--on a Segway.  This was a "yet-to-be-claimed" Christmas present Vicki gave to Norm last December.  The tour was a hoot.  We were like a row of little ducklings following the leader through Sarasota's cultural district.  We learned about the opera house, all the theater houses and a good bit of Sarasota's history.  And, the segway's were easy to ride and control and a nice break for tired legs.  Only one little problem.  Norm got a bit frustrated with the speed of the tour.  After his orientation and after gaining good control, he wanted to "put the pedal to the metal", but the tour guide would not allow it and he had to be scolded a couple times. 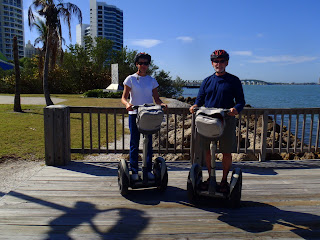 Vicki and Norm on their Segway Tour in Sarasota
We received a very special treat a day or so later.  Our very dear friends from our old hometown and church in Oconomowoc, Wisconsin were in town and visited with us for a day.  Tom and Pat Schildt and Terry and Cathy Andrus and we took a walking tour of downtown Sarasota, ate lunch al fresco and relaxed on Tide Hiker for a while.  Then, we all toured Beverly's (Cathy's mom) home on Long boat Key.   Of course we were hungry again--its the American way, you know.  So, off to dinner to a great Italian restaurant. 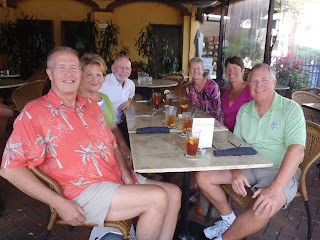 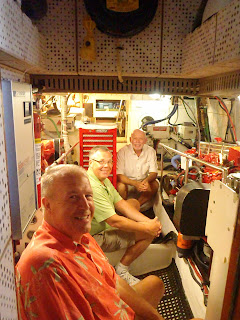 Tom, who had never been on Tide Hiker before, and being a retired tradesman, had lots of questions.  So, a detailed tour of the engine room was in order.
It was a fantastic day with fantastic friends.  If we settle in these parts, we'll be able to see them more often--giving Sarasota another edge in our thinking.
The next big event was St Patrick's Day.  And, Sarasota celebrates it in style.  A couple streets were closed off and the downtown bars were jumping till wee hours. Our friends Bob and Stephanie aboard September Song, Joe and Julia aboard Sea Pearl and Todd and Brenda aboard Life's 2 Short arrived early (like us) to rest up for the big day. And, Doug and Tammy, "the professionals" aboard Gypsies in the Palace drove over from Cape Canaveral. So, we now had a quorum and were able to celebrate St Pat's.  Here's a few shots that we know will make the blog albums. 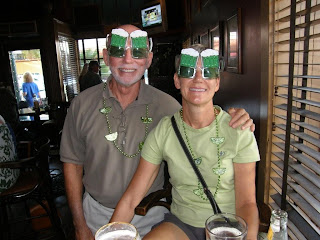 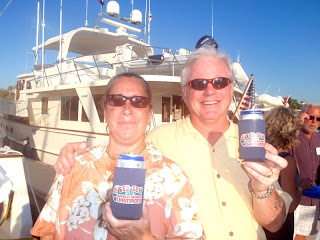 Tammy and Doug displaying their mobile coozies.  They keep them on their person 24/7,
like professionals do. 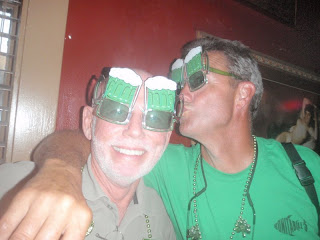 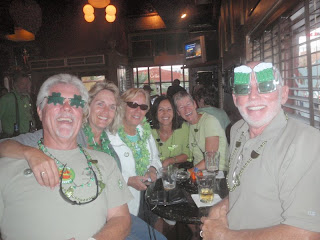 Bob, Brenda, Stephanie, Julia, Vicki and Norm posing for Todd
Another important reason for stopping in Sarasota was the Defever Cruisers 2011 Rendezvous.  One hundred twenty five members and about 25 Defever boats descended on Marina  Jack Marina.  We had two days of seminars covering important boating issues, raffles, banquets, open boat tours and partying, including dancing, till the wee hours.  All in all, it was a very successful event.  Vicki was the registrar and got lots of well-deserved accolades for her hard work.  We're waiting for some pics of this event.  We'll add them later.
Well, tonight starts the one millionth season of the TV program "Dancing with the Stars" as Norm likes to point out. Vicki says that this is a reason to keep the party going.  So, Steve and Di aboard Aurora and Joe and Julia were invited for dinner and a "movie" tonight.  Di and Vicki are humongous fans and never miss an airing.  Unfortunately, Joe and Julia have other dinner plans but said that they will be by for the "movie".  Do you suppose Joe or Julia will become fans like Vicki and Di?  Stay tuned to an upcoming post for an answer to this cliffhanger.
Posted by Norm and Vicki Naughton at 3/21/2011 01:55:00 PM No comments: