Get the Grill Ready--It's Mahi Time!!

After enjoying the Research Center and a wonderful seafood pasta dinner aboard Life's 2 Short at Lee Stocking Island, we began our journey north and back to the US. (It seems that Brenda is more than a pyromanic. She is also a great cook and the seafood pasta and salad dinner was to die for. Thanks guys. Hope to see you on the waters again soon.)

But there were still places to see that 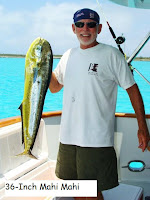 we missed on our cruise south. So, we first went outside (the deeper Exumas Sound, rather than the more shallower Exumas Bank) to Black Point to reconnect with Rickshaw. Life's 2 Short continued south to Terrebarrie. Since we were in deeper water (2000-3000 fathoms), we let out the fishing line in hopes of catching a Mahi Mahi. And, we got lucky. After an hour of cruising, we got a strike. Vicki slowed down the boat and kept her in the right position as Norm fought the fish. We lucked out and were able to land a 36-inch Mahi. Not too big but good for my first catch. After cleaning up, we set the line out a second time. We fished for another hour. Norm went up to the bridge to relieve Vicki at the helm for 5 minutes. Unfortunately, in that short time, another fish was on and took the entire lure and 300 ft of line with it. Bummer! Oh well, we have some meaty fillets in the fridge from the first catch.
We caught up with Rickshaw that night. Vicki had already thawed some flank steak, just in case. So we needed to eat that. Rick and Lynnie joined us for steak and potatoes on the barbie. Hmmmmm.

The winds have been picking up and are forecasted to continue to do that, ala last month. So we were rocking and rolling in the anchorage. We departed the next day for Pipe Creek. We missed it on the way down and it has been described to us as the "Jule of the Exumas". We anchored between Rat Cay and some visible rocks called "the mice". A funny phenomenon occurs here. The boat moves in opposite direction to the tidal flow. This was described in the cruising guide so we were ready for it, but still weird. Neither Rickshaw nor we were happy with the hold here and slept uncomfortably that night. We decided to haul out the next day after a brief dingy ride to look for some "wonderful" coral reefs to snorkel. Ugh! Nothing to be found and the Pipe Creek area, to us at least, is very "over rated". One saving grace was our dinghy ride over to Sampson Cay Yacht Club on Sampson Cay. It was Saturday and lunch buffet was being served on the beach. So, we all feasted on all-you-can-eat Bahamian barbecued chicken and ribs, Bahamian mac and cheese and corn on the cob. We had a great time on the beach with the locals. Vicki decided to challenge all to a game of horseshoes, declaring herself the "Woop-ass Woman". She did in fact win and was crowned reigning champion. We played lots of horseshoes and drank lots of rum punches and beer. So many in fact the tide went out and left us stranded. Ho Hum, stranded on a warm sunny Bahamian beach with all-you-can-eat buffet, ice cold beer and rum punch. Oh, the perils we must endure. 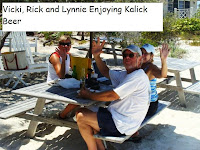 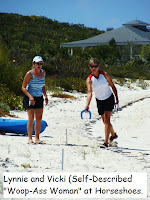 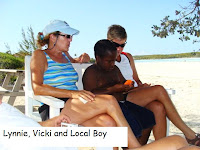 We departed for Shroud, another Cay we missed on the way down; and, hopefully a calmer anchorage with good holding. Shroud has some spectacular winding creeks through mangroves ending at Camp Driftwood-a campsite used by a sail boater for years. The creeks were beautiful with dark blue ribbons of deep water inside light blue shallow parts. Rick, Vicki and Norm hiked up to the top of the hill to the campsite and immediately were impressed by the vistas we were able to view from there. 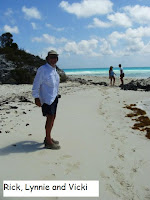 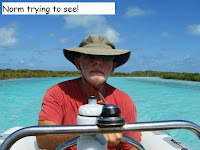 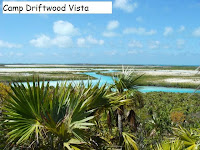 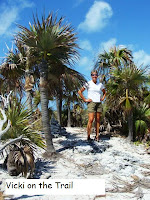 But again, the winds caught up with us and gave us another rolly-polly anchorage experience. So, off to Norman's Cay and McDuff's restaurant, bar, and Internet WiFi. Here, we skyped 2 of Norm's daughters in Milwaukee and other friends. Norm's brother and a few others were not on line and therefore un-skypeable. 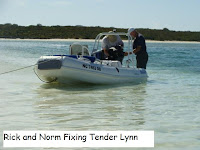 conch for gifts. So, we both dinked the 20 minutes over to the pond. Unfortunately, we did not time the tides correctly and we ended up in shallow waters. Rick's lower unit grabbed up some sand and clogged. We remember what Bob on September Song did and repeated the procedure. We removed the rubber tube connecting the intake to the pump and blew the obstruction free. Da Daaaaaa, it worked and Rick was up and running again.

The winds are forecasted to be worse over the next few days (20-30 knots) So, once again we ran ahead of the strong stuff and are currently in a slip at the Nassau Harbour Club Marina and will be for a few days. Winds have picked up as expected and we have been hit with a couple squalls while here. But we are safe and comfortable here and will wait out the weather before crossing the "Tongue of the Ocean"--the really deep stuff, the Bahama Bank--the really shallow stuff; and finally, the Gulf Stream--the really deep and fast stuff.
While waiting we decided to take advantage of being here and to do some exploring. We took down the bikes and Vicki and Norm biked into town. NOT a very bike-friendly place--speeding cars on very narrow streets. Vicki walked her bike a lot. We got to the Cruise Ship Terminals and toursit haven. Straw markets, conch shell, t-shirt and duty-free liquor and perfume merchants abound. Of course, there are the many colorful restaurants serving Bahamian, Island and American food. One building of special interest is the library. It used to be the jail. The building was a round, 2-story one with a balcony on the top--probably for the guards. The books were on shelves in the cells. Inside pics were not allowed. 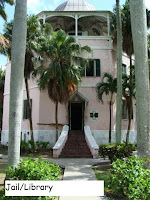 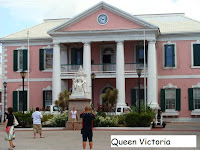 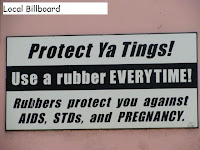 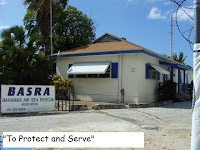