Northern Florida, that is.  We know what's going on way, way up Nort. Ouch!! Burrr! My back hurts just thinking about all that snow shoveling.  Nope, we'll just stay down here for a while.  But, we are back in cruising mode.  Here's our first couple of cruise days: 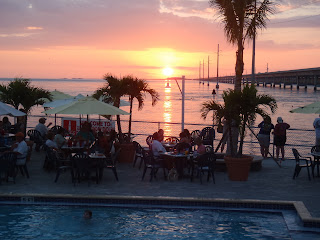 The Keys are known for the wonderful sunsets.  This was no exception. 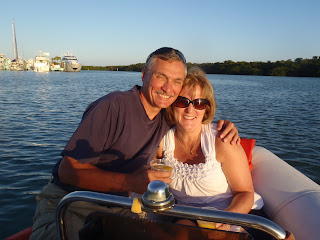 Last weekend, our friends from Delaware, Roger and Lisa, visited us.  We took the dinghy out to the entrance to the harbor and toasted the sunset with champagne and hors d'oeuvres.
Tuesday's cruise from Marathon to Little Shark River was great.  The weather was settled, the seas were calm and Tide Hiker performed like she never docked for 3-months.  (OK, OK, the truth is we did a shake out cruise for 2 hours the week before and worked out all the little gremlins that accumulate after 3-months at dock).﻿  We actually were not due to leave until Wednesday, but strong winds were forecasted for later in the week.  So, we jumped on the good weather and headed out.  Little Shark River is in the Everglades.  It's has a very nice, well-marked, easy inlet.  A couple of years ago we were here, but followed September Song way up river.  Since we were only here for one night, we anchored closer to the inlet.  We were alone for about an hour before 5 other boats arrived.  We're told that it can get really crowded at this anchorage--it's well known.  Norm grilled some chicken and Vicki made some apps and sides and we feasted with a nice Shiraz until bed time.
Wednesday's cruise from Little Shark to Marco Island was different.  The winds picked up a bit sooner and we had to travel a good distance west into the Gulf of Mexico to navigate around the Cape Romano Shoals.  We lost the protection we could  have gotten from being closer to shore and alee.  So, the winds and the 2-4 footers (and occasional 5's) were either abeam or on our nose.  We lost a bottle of wine that was in the galley.  Vicki found it empty and turned over.  Later, Norm, not knowing about the wine was doing one of his engine room checks and discovered a red substance in the engine room bilge.  He smelled the fluid and wondered "vinegar?"  It looked like hydraulic fluid, but smelled like vinegar.  He decided to keep an eye on it since everything was running well.  Later, Vicki told Norm and he stopped worrying about the bilge.   So, while we were always safe, the ride was a bit "snotty" at times.  Another great meal and a bottle of hydraulic fluid settled our nerves.  More later......
Posted by Norm and Vicki Naughton at 3/03/2011 10:50:00 AM No comments: